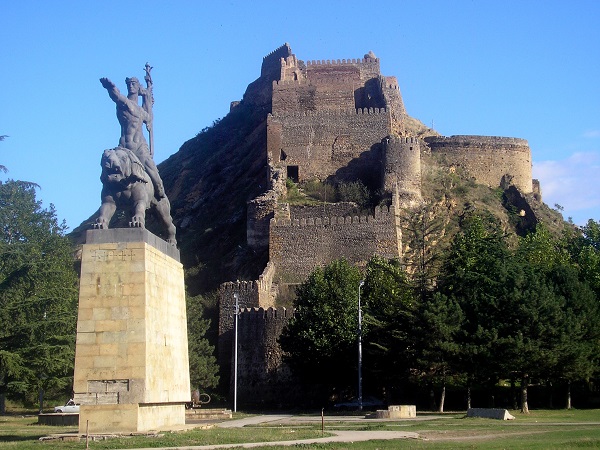 The main castle on the hill was called Gori, which means “hill” in English. In Georgia’s history, this was mentioned in the early seventh century. Some historians believe that this castle was built by Caesar Heraclius to store ammunition for war against the Iranians.

After the eleventh century, the area became an active trading center. According to historians, these activities were due to the founder of the city.

Because of its geographical location, enemies often targeted the castle and tried to conquer it to have control over Shida Kartli area. The castle has been invaded by enemies many times throughout history and has been controlled by Iranians and other nations. This stronghold has been demolished and rebuilt many times.

The current appearance of the castle was built in 1774, which was during the reign of Erekle II, but was severely damaged by earthquake in 1920.

Stalin Museum includes a memorial home where Joseph Stalin was born. The museum is built with a tower on top of it. There are many unique items in this museum, including personal collections of paintings, pictures, photographs, films and other unique monuments.

This historic castle is located on a rocky hill in center of Gory. Its ruins on the northern slope and archaeological findings indicate that there was a castle in the area dating back to the first century BC.

This temple as Catholic Church Built between 1806 and 1810. In 1920, the building was severely damaged due to an earthquake. In Soviet times, Gori School of Music was built inside this church. This building was delivered to Georgian Orthodox Church in 1990.

Georgia offers many unique monuments as well as great souvenirs. You can also try purchasing some souvenirs in Georgia to bring back to your home country.

The museum was founded in 1935. Currently, the museum hosts more than 48100 exhibitions that include masterpieces of metal industry, paintings, decorative sculptures, imprinted artifacts, unique Colchis silver coins, ancient coins from the time of Queen Tamar and David Narin, Ancient Oriental Coins, art forms in Georgian and Arabic languages, a collection of manuscripts written in Georgian, a huge collection of photo archives and many other attractions.

Church complex and local residence is located at a height of 600 meters. The bath in this area is used to treat various problems. Also, this bathing system will have a positive effect on the nervous system of the body.

Uplistsikhe is a city of carved stones that lies 10 kilometers east of Gori and is located in Mtkvari river bank. One of the oldest settlements in this area is Uplistikh, which is mentioned in history.

The Uplistikh and the surrounding monuments and monuments belong to the area and date back to the Bronze Age.

This village is located 6 km away from Gori City. In this area you can find important historical things like Castle of Vere, St. George’s Church, Church of Mary, Green Church, Tsedisi Castle as well as finding other monuments.

This cathedral age goes back to the eighth and ninth centuries, and is located about 7 kilometers Gori City. According to reliable sources, the building was built by the king Vakhtang Gorgasali. Although the original structure of the building is not preserved, the style of architecture of the eighth century can be easily recognized.

This church is in Municipality of Kareli and is located in a village called Urbnisi. The antiquity of the existing elements and the inscriptions in this place go back to the 5th and 6th centuries.

for further information on Georgia, you can visit our travel guide Georgia page.