Most Beautiful Tourist Attractions in Tunis

The capital of Tunisia, Tunis, is one of the simplest cities in North Africa, and there are many tourist attractions in Tunis to visit for travelers. Most of the sights are located in the “La Medina” or the old part in Tunis, which is a tourist attraction in itself. Outside the labyrinth of the winding streets of Medina, a new European-style part of the city can be see. This area is full of French café, Tunis attractions as well as chic architectures.

Tunisia is one of the countries that has great locations in the top monuments in the world. Therefore, it is worth visiting after Egypt to explore more historic locations if you have the means of traveling to this great country.

Bardo National Museum one of The Best in Africa 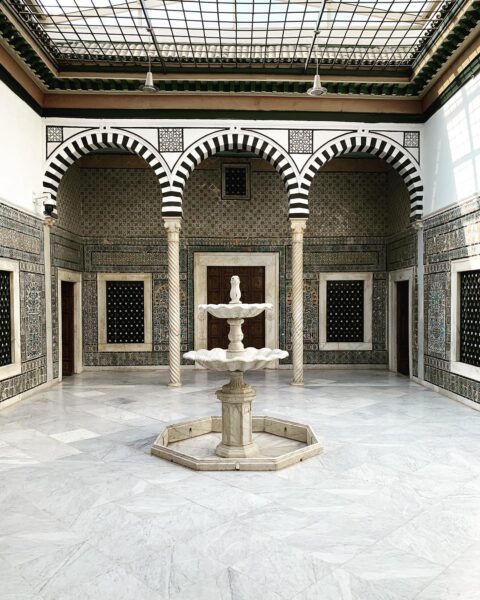 Bardo National Museum displays the world’s most famous collection of mosaics in one of magnificent tourist attractions in Tunisia. Next to the Egyptian Museum in Cairo, the Bardo Museum is one of two unparalleled museum experiences in North Africa. In each section, exquisite and vibrant mosaics from the excavations throughout Tunisia are on display, forming invaluable treasures. Also, on the ground floor you can see exhibitions from the Neo-Carthage, Christian and Islamic eras. 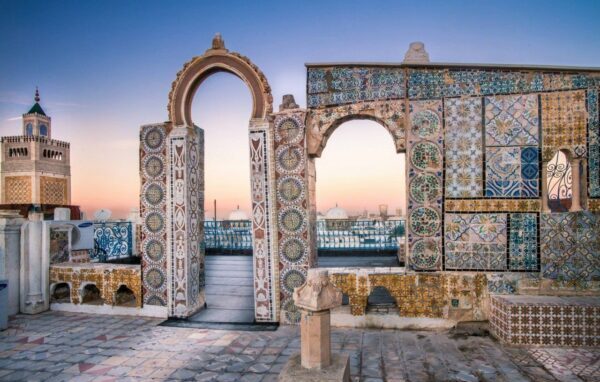 La Medina is one of main Tunis tourist attractions. It is full of old buildings that you will encounter while exploring its narrow and intertwined alleys. Medina or the old city has many tourist attractions in Tunis in city’s historical district. The main entrance gate marks the end of the new city and the beginning of the old city. This gate is called “Bab El Bhar” and was built in 1848. During French colonial rule, the structure was called the “Gate of France”. Although the city walls have collapsed, in the past they had schools, mosques and tombs with magnificent tiles in their construction. 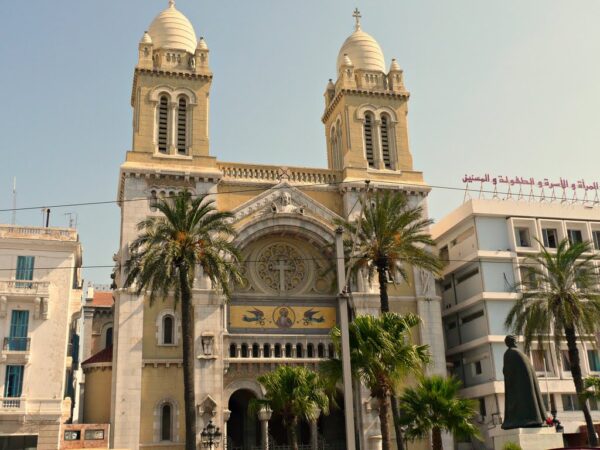 You can find the majestic Cathedral of St Vincent de Paul in the new part of the city. Moreover, it is one of the largest Tunisia attractions and a surviving building during the French colonial period in Tunisia. The entrance to this beautiful neo-Romanesque structure occupies a glorious north end of Place de l’Indépendence and was a monument to French rule at the time of its construction in 1893. 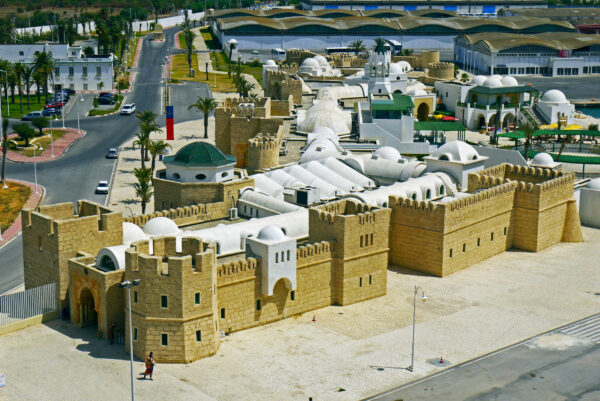 Tourists can see the port of La Goulette, or Halq al-Wadi, on the outskirts of the capital. This port was one of Tunisia attractions with strategic importance. From 1574 onwards, the Ottoman rulers expanded and strengthened the fort from Spanish era. For a tour you can explore the Spanish and Ottoman fortresses or go to the gate of the “Old Arsenal”.

The Great Zaytuna Mosque is one of the best tourist attractions in Tunis for architecture enthusists. It is spectacular place for some of the best examples of religious architecture in the country. The mosque was built in 732 AD and was modified in the following centuries by the empires that conquered the city. Although non-Muslims cannot enter the mosque hall, seeing this architectural splendor does not leave the viewer unsatisfied even from the outside. Moreover, tourist can have 360-degree views of the entire old from the roof of the olive tree mosque. 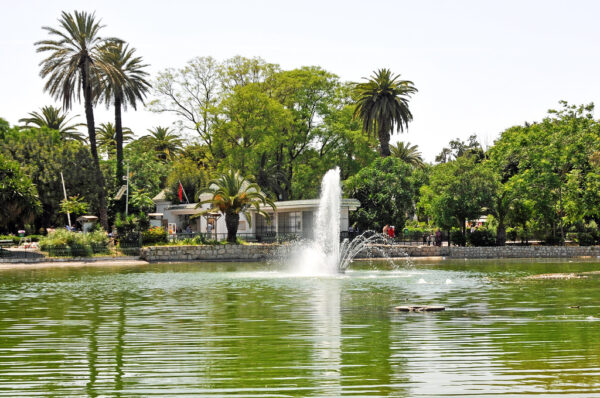 This Belvedere Park is truly one of the most naturally beautiful tourist attractions in Tunis. Also, it is great place to rejuvenate and get away from the hustle and bustle of the city. On the slope of the hill, the palace trees, olive, fig and palm trees, create a pleasant green space. Also, those who climb the hill, receive unparalleled views of the whole city as well. 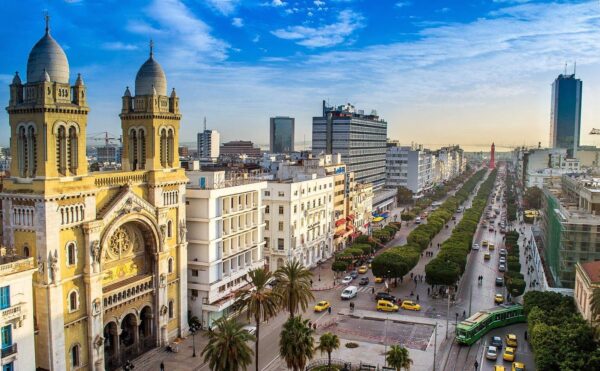 The new city district developed during French colonial rule. At its core, Avenue Habib Bourguiba is a wide street with palm and eucalyptus trees. This street extends to the east and goes from Independence Square to the port. Architectural enthusiasts should consider a combination of colonial and post-colonial buildings on Avenue Habib Bourguiba. At the intersection of this street, you can see Place du 14 janvier, which has a memorial Clock Of Habib symbolizing modern Tunisia. 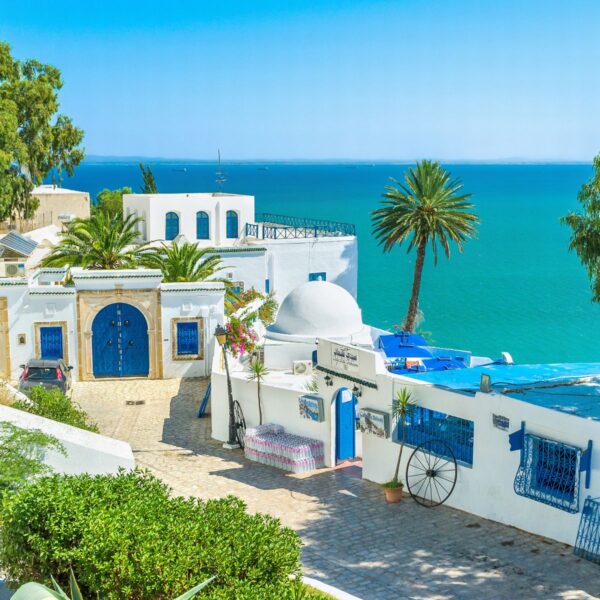 The amazing neighborhood of “Sidi Bou Said” was built in the Andalusian style with cobbled streets and blue-and-white houses. Also, the neighborhood became something like an artists’ hangout. In addition, the locals also spent their weekends in this place as well. There is no tourist attraction in this neighborhood except its magical white and blue buildings. This makes it a cozy and peaceful place to hang out in one of the most uniquely beautiful tourist attractions in Tunis.

Remains of ancient Carthage, this rich Phoenician sea legend city, are there throughout the Gulf of Tunisia. The ruined columns and the heads of the marble columns are surrounded by a beautiful view of the Mediterranean. These ancient relics may not have much to say compared to other historical sites in North Africa, but that certainly does not mean you should ignore them. If you visit here, do not miss the amazing scenery on the Byrsa Hill.