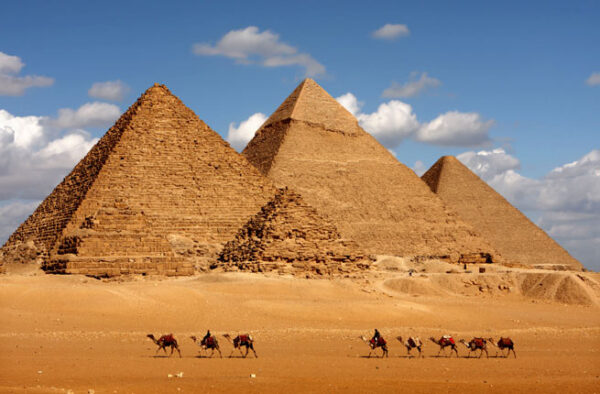 Cultural Monuments in The World

Monuments in the world are what civilizations leave behind bearing witness to their former glory. These landmarks of the world such as sacred sites, royal palaces, fortifications, ancient centers of commerce, ports, and tombs are all valuable remnants of a nation’s history.

Although some of these places have been lost through centuries, decayed by time and are no longer in use, this article introduces amazing monuments in the world that can represent the history of different nations around the globe.

Roman Forum in Rome in Italy 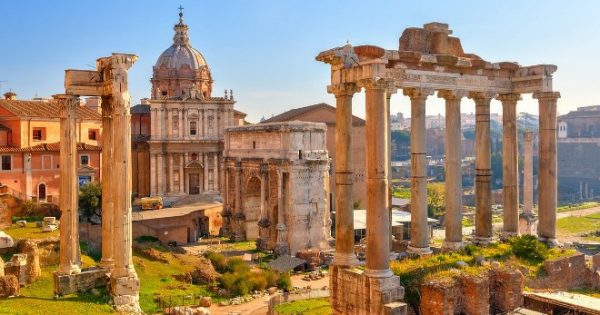 In the ancient world, Rome was the place to be. The Roman Forum is one of landmarks of the world that gives a glimpse of the sheer magnitude of that empire. The location of it was in a valley between the Palatine Hill and the Capitoline Hill. In fact Roman Forum was the center of the Roman Empire from 500 BC to 400 AD. This place was the center of many activities. In those times, you could observe victory celebrations, elections, public lectures, criminal courts, gladiatorial competitions and trading.

Egyptian Pyramids near City of Cairo

Egyptian Pyramids are perhaps the most famous monuments in the world where there are smaller models of them available in different cities. In the desert south of Cairo, three huge pyramids testify to the heritage of the ancient Egyptian pharaohs.

Khufu’s pyramid, usually famous as the Great Pyramid of Giza, is the one you see in postal cards and famous photos of Egypt. This pyramid is the largest and oldest of the three temples and is one of the Seven Wonders of the Ancient World. Pyramid of Khafre and Pyramid of Menkaure are the two smaller pyramids nearby. Also, there is Great Sphinx of Giza in front of this complex, which includes smaller pyramids belonging to female members of royalty and tombs for relatives and courtiers.

Acropolis of Athens in Greece 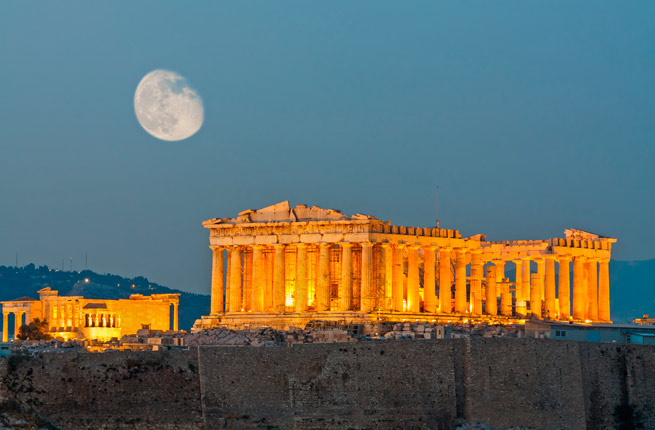 Acropolis is one Athens’ most important architectures which has very interesting features and properties. This city was built from 461 to 429 BC. It contains the Parthenon, the Temple of Athena Nike, Propylaea and the Erechtheion, which together illustrate the power, wealth and complexity of ancient Greece. The Parthenon is one of the classical examples ancient landmarks of the world, but the Erechtheion has beautiful landscapes with its superb verandas. You can enter through the Beulé Gate and make sure you have hours of time to explore there.

There are more world famous temples that you must see when traveling abroad. These temples represent different culture and religious practices that still in use even till today. You will get to know more about cultures by visiting them.

Pompeii in Campania Region of Italy 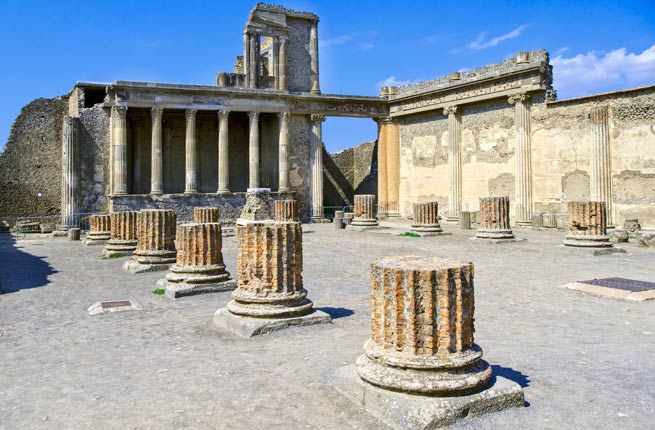 The eruption of Mount Vesuvius completely destroyed the city in 79 AD and the city was buried under molten lava. The melt dried over time. The city is one of monuments in the world that represents the people’s unfortunate fate at the time of the volcano eruption. For example, the meat and fish in the store, the bread in the bakery, the bathhouse, the amphitheater, the church, the temples, and more remain intact.

Ephesus in Izmir Province of Turkey 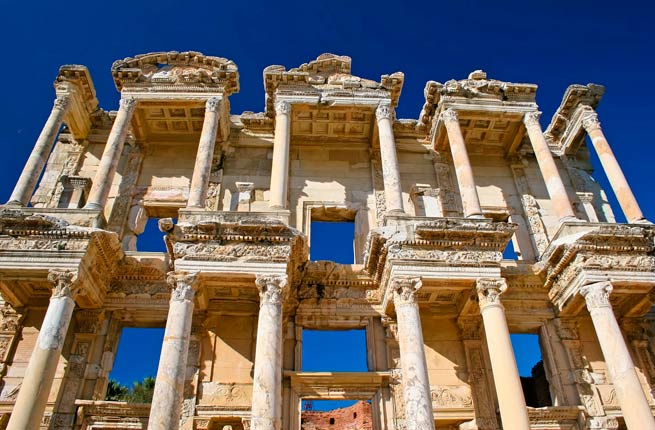 Tourists can find Ephesus is near the Selçuk in Izmir province. Ephesus is one of the most important Roman-Greek landmarks of the world in the Eastern Mediterranean. It was one of the most powerful trading ports and sacred places in the cult of Artemis.

Ephesus was eventually conquered by the Eastern Romans and fell into the hands of the Ottoman Empire. Today visitors can visit Ancient Church of Mary, Temple of Hadrian, the Roman Baths, the Vediusgymnasium, the Amphitheater and the incredible Celsus Library.

Moreover, if you are traveling in the summer, it is best to go outside early in the day or late at night for cooler temperatures and less crowd.

Petra in The Country of Jordan 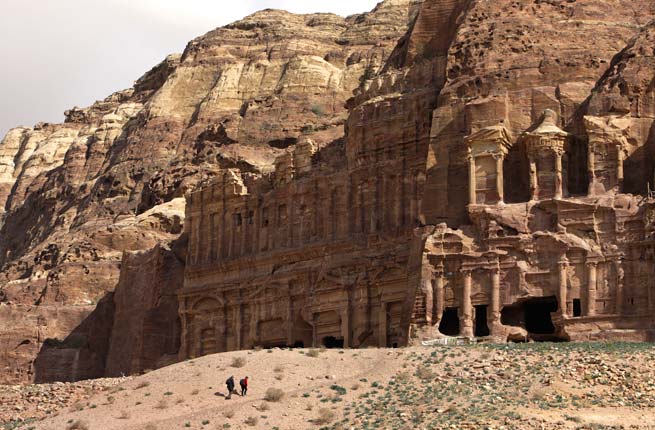 Ancient relics carved this incredible city on rocky cliffs between the Red Sea and the Dead Sea. Petra which is one of wonderous monuments in the world was lost until 1812, when it was again rediscovered. What we can see today includes 800 tombs, luxurious temples, churches, and the treasury. You can reach this place through the canyon famous as Siq.

Machu Picchu is not actually the most important sightseeing spot in Inca, but it is one of the most famous monuments in the world to visit because it has been remained intact during the Spanish invasion of South America. It was built in 1400 as the Inca Empire’s Pachacuti property. As you climb the peaks you can see its beauties and mesmerizing scenery. It is good to get a tour guide here to get you there and explain the history of this place. 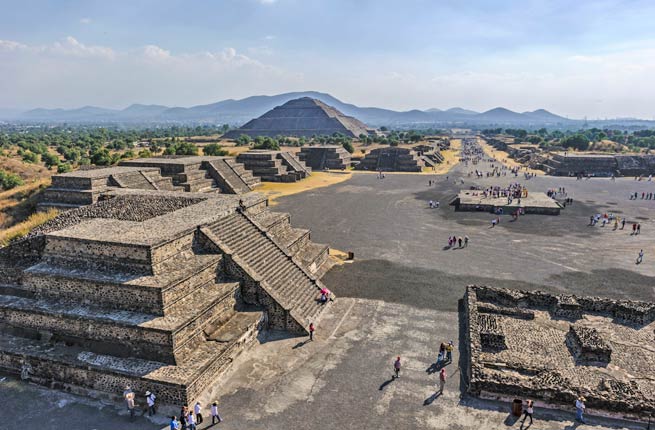 The location of Teotihuacan is in the northernmost part of Mexico City. This place is home to remarkable pre-Columbian pyramids in Central America. Some believe that the city was built between 100 BC and 250 AD. It has multi-family residential textures making one of largest landmarks of the world. You can still see the vibrant wall paintings that are well preserved. To see amazing works from pre-Spanish Mexico, make sure you visit the National Museum of the Museo Nacional de Antropología as well.

Great Wall of China in Beijing 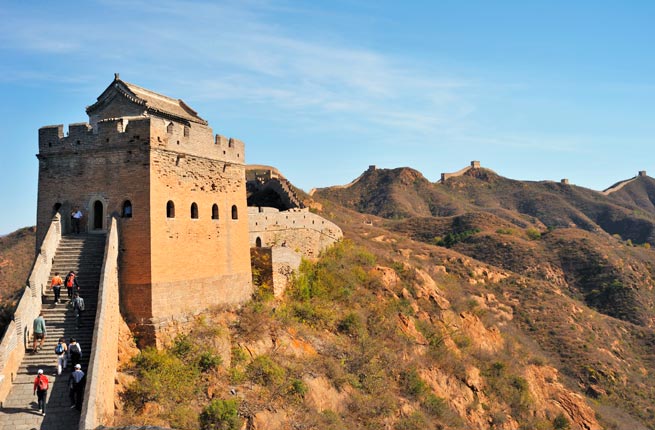 Construction of the Great Wall of China began in 220 BC, when China’s first emperor, Qin Shi Huang, decided to build strongholds to guard against enemy invasion. Most of the wall was built during the Ming dynasty (1644-1688), when it became the largest military structure in the world. This wall has a length of 20,000 kilometers making it one of the longest monuments in the world. Visitors can see the observation points and fortifications used by Chinese soldiers over centuries ago.

Also, the Badaling section of this wall is easily accessible through Beijing where many tourists and visitors come to see the beautiful view here. Instead, if crowded, you can see this wall in Mutianyu, which is less famous. 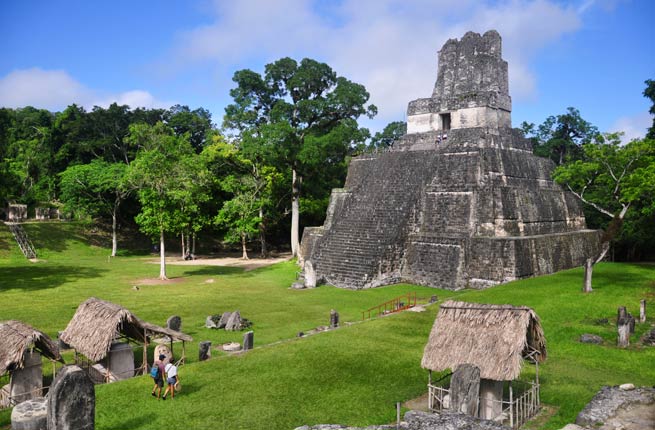 Tikal is a forest town built by the Mayas and reached its peak in the eighth century. The city disappeared mysteriously in 900 AD. In the late 1800s, archaeologists began to discover huge temples. It was amazing to see the huge temples that the Mayans built without the use of metal tools, animals to carry cargo and even wheels. Temple IV is 71 meters high and a must visit place among many monuments in the world. Visitors wanting to visit ancient sites can go to Tikal National Park or stay at nearby hotels. 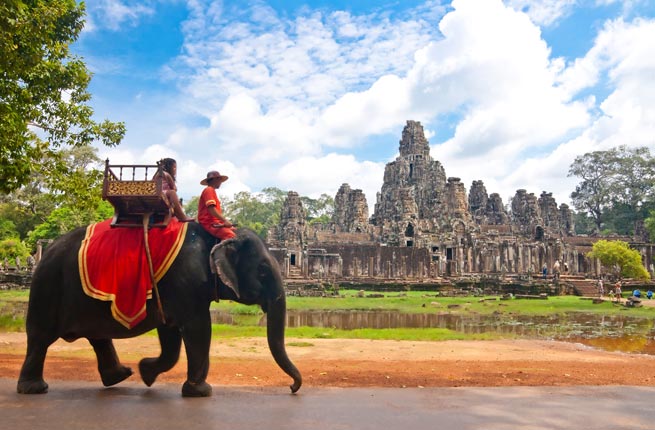 Angkor Wat as the largest religious monuments in the world is well preserved and has significant Khmer temples that make up the Angkor Temple Complex. In the twelfth century, King Suryavarman II made it the capital of the Khmer Empire. The five conical towers are positioned together to form a large lotus. To get here, most visitors hire a car and a driver for the trip, but you can also use bicycles and electric bicycles.

Borobudur Temple in Java in Indonesia

The incredible Burobodor Temple is one of spiritual landmarks of the world representing Buddhist philosophy. You can find this temple in Java which is also the largest island in Indonesia. The temple has a pyramid form and shape, each of which ascends to illustrate stages of enlightenment. At the bottom of the temple, the highlights represent the Buddhist sutra as well.

Famous Landmarks of The World

There are very famous landmarks of the world scattered in all the continents which represent the human achievements as well as extensive geoscience knowledge in making these structures.

Stonehenge in Wiltshire in England 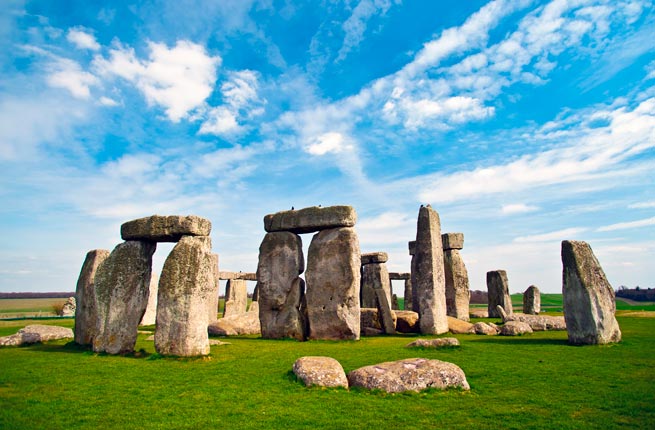 Stonehenge is one of the most mysterious monuments in the world. It was designed in 3000 BC and used until 1600 BC. It was probably the most widely used place of worship as a religious site. Archaeological excavations have shown that the site was once buried in the ground. The mystery of this place is how the 45-ton stones were shipped without wheels.

Moaiin The Easter Island in Chile 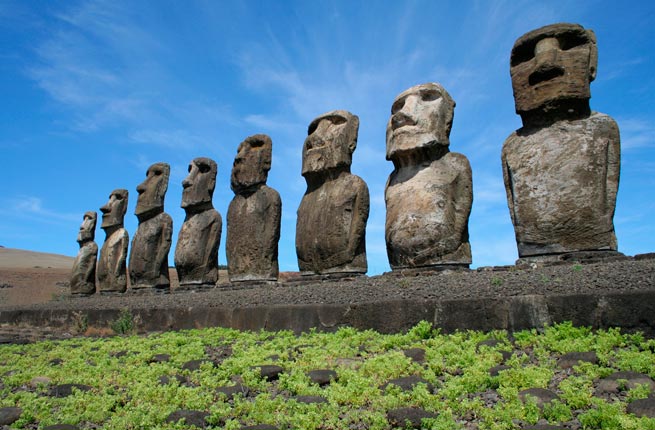 Like Stonehenge, integrated human faces are carved by the Rapa Nui people. Most of the Moai sculptures were carved at the Rano Raraku in the east of the island, but it is still unclear how they were carried and mounted on a rock platform. This is one of those monuments in the world which its origin is still unknown.

Ellora Caves in Aurangabad in India 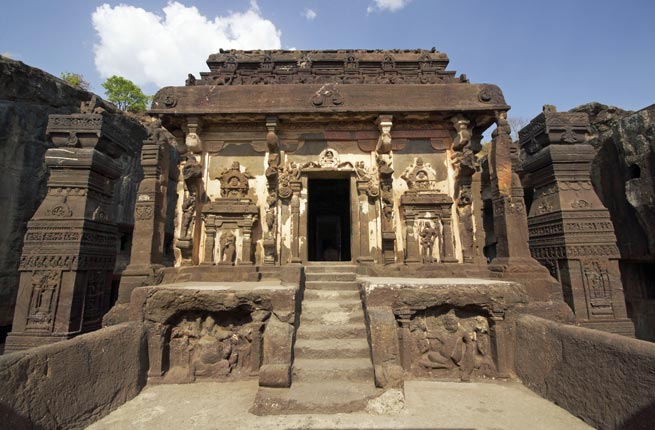 The caves of Ellora, dug into the high cliffs of Maharashtra, testify to the peaceful coexistence of Buddhism, Hinduism, Jainism in ancient India. This ancient site contains 34 monasteries and temples dating back to the 7th century. These huge, decorated caves are incredible works of art that required a great deal of sculpting skills.

However, one the most important and interesting aspect of the Ellora caves is the Buddhist inscriptions and statues that depict the war between powerful Hindu and Buddhist gods. The Jane’s Caves are at the bottom of the complex but worth seeing.

Persepolis near Shiraz City in Iran 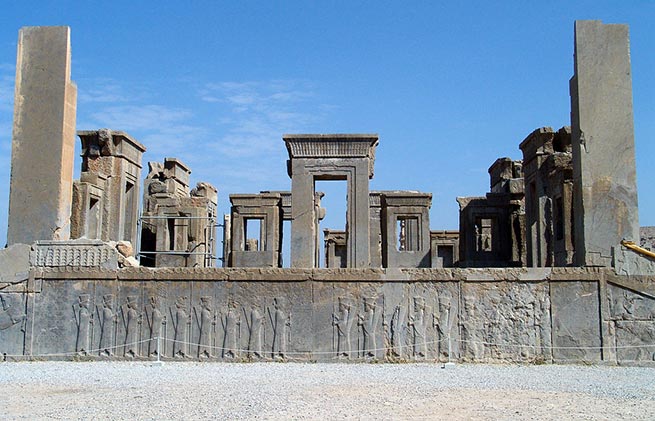 Persepolis is the name of one of the ancient monuments in the world located in Iran that for many years has been the magnificent and ceremonial capital of the kingdom of Iran at the time of The Achaemenid Empire. In this ancient city there is a palace called Takht-e Jamshid, built during the reign of Darius the Great, Khashayar Shah and Ardashir I and has been around for about 200 years. On the first day of the New Year, large groups of people from various countries, representing the government officials, gathered in Persepolis and presented their gifts to the King. 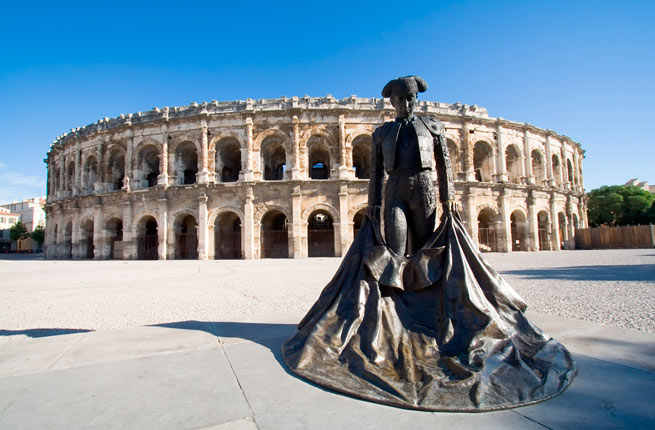 The well-preserved Roman amphitheater is also found in Nîmes. This amphitheater was a copy of the Colosseum and was used to fight gladiators, executions and other bloody displays. It may be hard to believe, but the Arena is still used today for concerts, bullfighting, festivities and fireworks display. Therefore, it make one of the rare landmarks of the world that still is in use even today. Taking part in a concert in this hall is a great experience and a memory for many years to come. 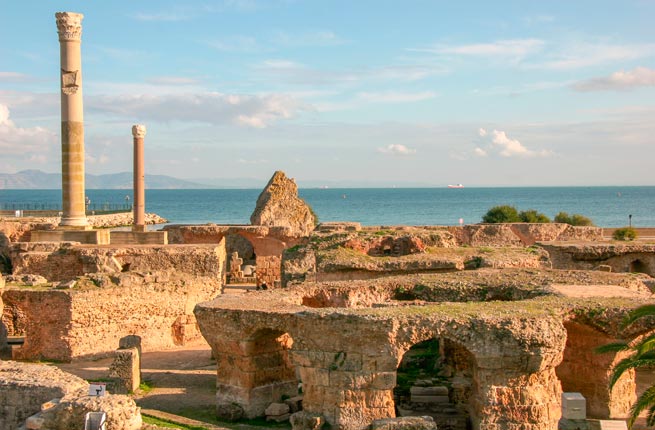 Queen Dido built Carthage in 814 BC. Carthage was a prosperous place in the Gulf of Tunisia and Central Africa. Later the Romans rebuilt the city, which had been destroyed during the Carthage War. In later centuries, the city was home to Christians, Arabs and Vandals. Today, visitors can visit the areas of Punic, Antonine Baths, Theater, Circus, Royal Palace and residential areas. 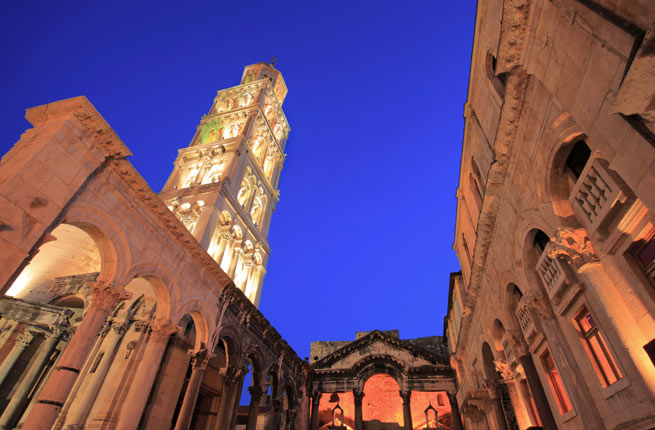 In the late third and early fourth centuries, the Roman empire Diocletian built a spectacular palace near his hometown of Dalmatia so that he can spend the rest of his life there. This makes Diocletian’s Palace one of most luxurious monuments in the world that still retains its beauty even after these many years.

His luxurious villa in the Adriatic Sea combines elements of Roman and Greek architecture with Roman garrisons. Furthermore, the four walls that surround the complex each have an entrance gate. 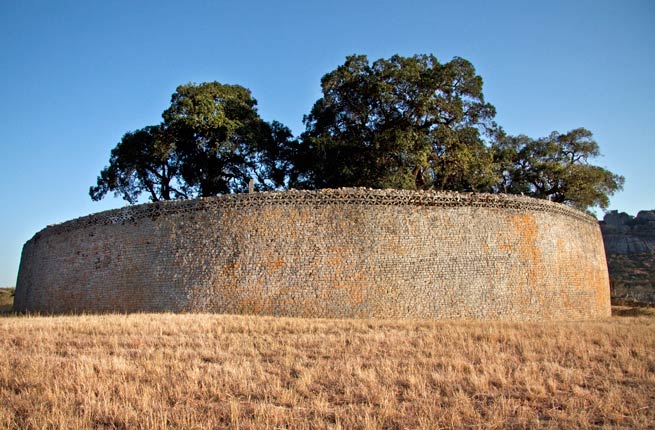 Great Zimbabwe is a UNESCO World Heritage Site and is one of oldest monuments in the world approximately 30 km from Masvingo. The ruins refer to the Bantu civilization of the Shona people in the Middle Ages.

Great Zimbabwe was built in the eleventh century and in the fourteenth century became the capital of a large country on a gold-rich plateau. Gold and Arabic coins have also been explored in the area, all of which indicate the city’s extensive trade with the world.