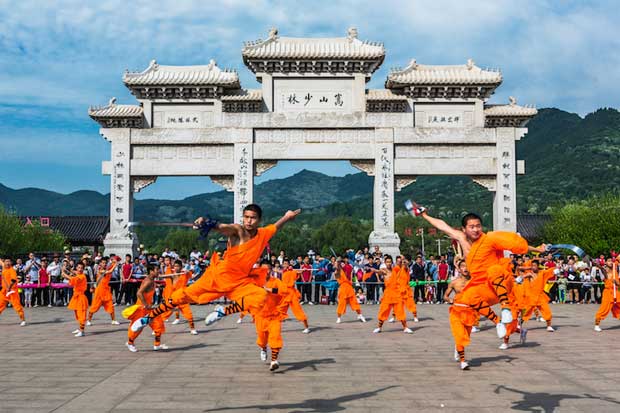 In china, there are many sight to visit and beautiful ancient temples of China are must places for cultural travelers to be. China is one of the oldest cultures in the world, and its vast empire is associated with Buddhist shrines. When you step inside the threshold of one of these religious buildings, you let go of your ego and you lose the meaning of time at that moment. Buddhists believe that there is no end to the past and the future. Here are some of these beautiful temples of China built in ancient times. 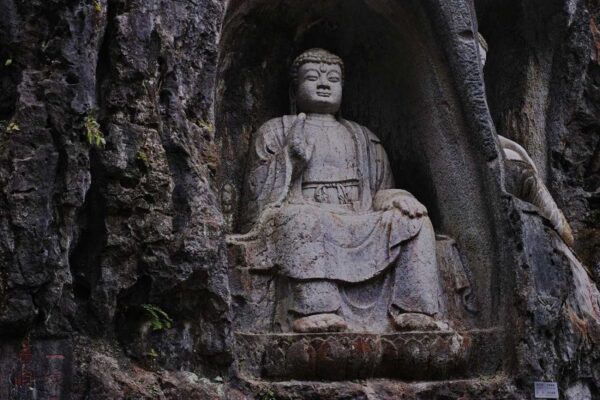 To enter the Lingyin Temple, you must enter the official hall of the heavenly kings. Chan Buddhism has been home to the Wulin Mountains for centuries. The scenic and beautiful mountainous area around the scenery her are as famous as the Temple of Ghosts amongst temples of China.

You have to pay to enter the scenic Lingyin-Feilai mountain area, which is full of bridges, monuments, sculptures, grottoes as well as works of art. This worshipping place is one of the largest and best taken care of in the country. The main monastery includes the Grand Hall of the Great Sage, Hall of the Buddha of Medicine, the Sutra Library, the Huayan Hall as well as The Hall of Five Hundred Arhats.

Nanshan Temple in South of China 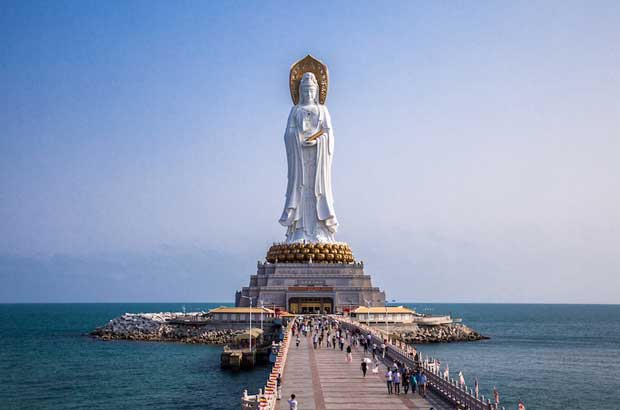 Nanshan Temple is the largest Buddhist temples of China that has been built in there since the founding of the People’s Republic of China. This area has a 100-meter (350-foot) white statue built on a rocky outcrop in the South Sanya Sea. All the grounds surrounding this area are built so that the statue is the focal point here. Its main entrance square is surrounded by a slender white stem that reaches the statue at sea.

A beautiful pond on one side of the street and a bunch of wood on the other attract your attention. This Buddhist shrine in South of China has an old proverb saying “Good fortune as vast as East Sea, long life as great as Nanshan Mountain” 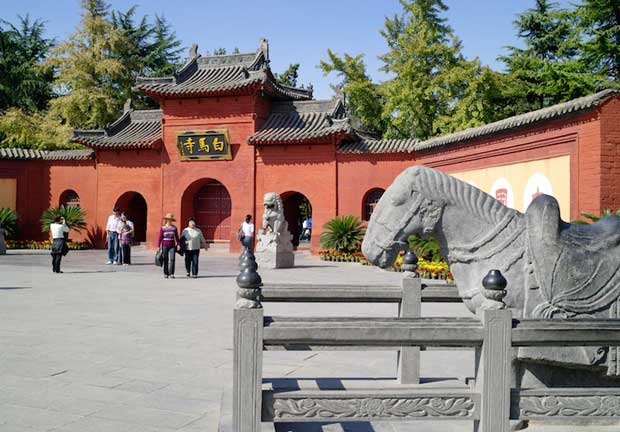 People say that the White Horse Temple was one of the first Buddhist temples of China. This ancient building, constructed in 68 AD, is located near the Eastern Han capital. This visit is easy for Western tourists because all the signs are available in English as well.

The main frame of the building has been restored many times over the years, especially during the Ming and Qing dynasties, in the 1950s and most recently in 1973 after the Cultural Revolution. Numerous halls open to zoos and galleries in this beautiful shrine. Note there are also beautiful statues such as the two mythical lions at the entrance, the Jade Buddha as well as the Sakyamuni and the Maitreya Buddhas in its worshiping hall. 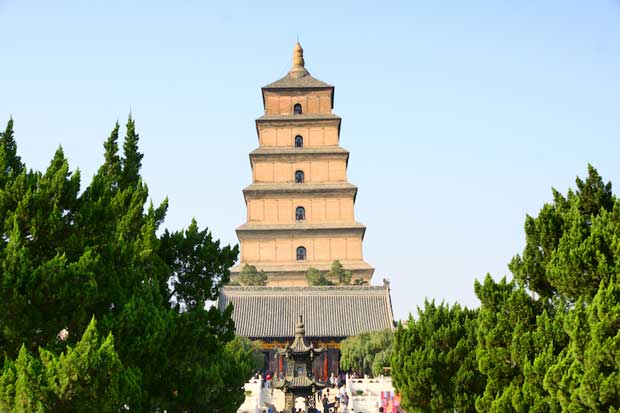 Giant Wild Goose Pagoda was built during the Tang Dynasty in 652 and has 7 floors in Xi’an. This Pagoda has been renovated many times over the centuries and was originally five stories high. One of the purposes of building this holy place was to use it as a house for Buddha statues brought from India. It is worth visiting this ancient building and seeing its changes to becoming a modern environment. Also, there is an open-air market in the south. 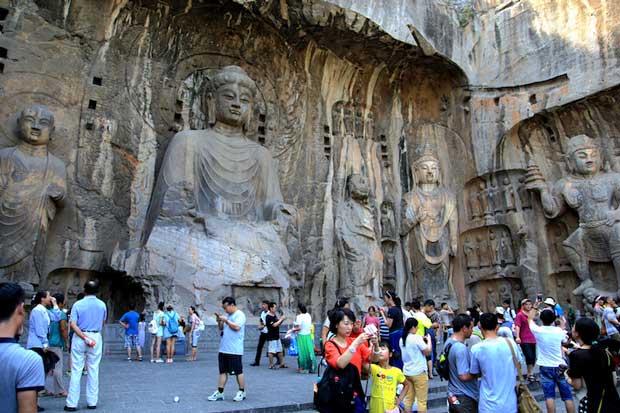 There are a lot of cave enthusiasts travel to limestone cliffs about a mile from Henan Province in Luoyang. In these caves, you can observe the world’s best examples of Chinese art from the northern dynasty of Wai and Tong (906-316) can be seen. A set of metal stairs and limestone can take you to the caves at the top of the cliff to see all 110,000 statues, 60 tombs and 2,800 inscriptions. The statues and Buddhas are made of limestone that forms the slope of the hill. Moreover, these rocks are located above a river. 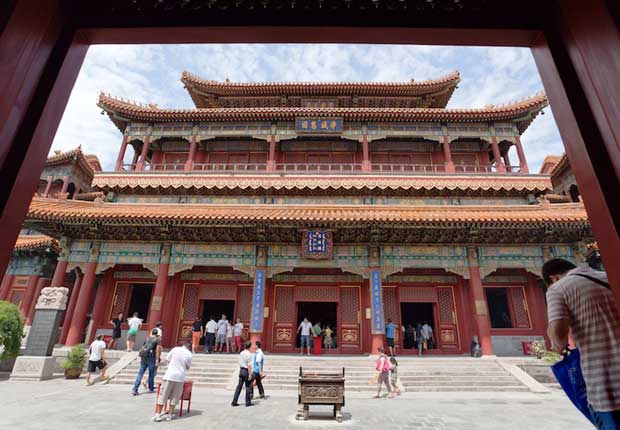 Right in the middle of the Buddhist pillar in Beijing is the Lama Temple. This monastery was the former residence of Yongzheng Emperor, who became a Lama in 1744. If you can only see one holy place in China, be sure to choose the Lama Temple.

This building is the most famous Tibetan Buddhist temples of China outside of Tibet. Lama Temple, in the heart of one China’s largest cities has breathtaking paintings, an 18-meter (60-foot) Buddhist exhibition in Tibet, tantric sculptures, handmade carpentry and stunning ceilings. The main building here includes five large halls.

Shaolin Monastery is perhaps the most famous places amongst temples of China. In fact, it is main ground of the 1500-year-old Shaolin Buddhist school. The shrine as well as martial arts school have been the target of repeated attacks over the centuries, most recently in 1928 when the school caught fire. The remaining halls have been modernized for tourists. Waves of travelers fill the hall of this building every year. Shaolin is a great place for people to practice martial arts. Also, it is a Wushu training center too where you can visit a courtyard full of kung fu newcomers. 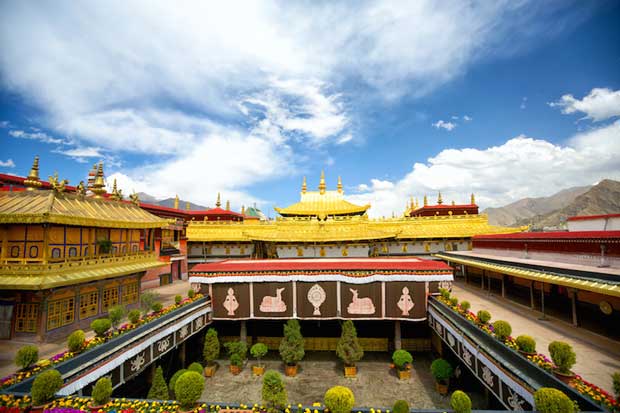 When you are in this place of worship, you are passing next to Buddhist pilgrims who are outside ancient Qoikang Monastery located in the center of Tibet. They have come to worship the 1,300-year-old golden central Buddha statue. The main building is maintained by the Gelug school, but is accepted by all different Buddhist sects.

The stunning gold roof of this two-story temple has a beautiful and unique appearance. Furthermore, you should visit the here in the morning for the best experience. In the afternoon, the temple section is off and can only be seen through the gates. 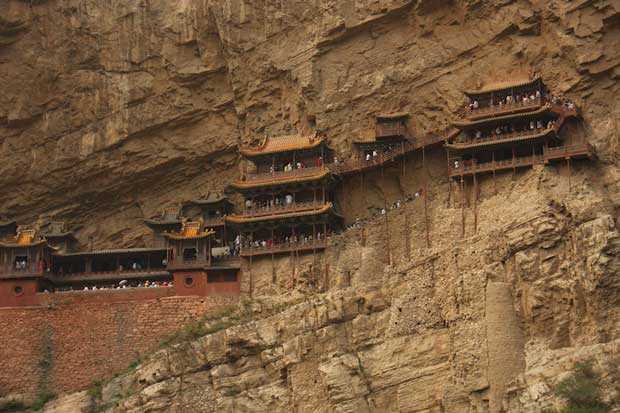 The monastery is perched on a 75-meter (246-foot) cliff. Beautiful symbolic Buddhist houses with long pedestals facing the cliffs. This makes it as one of the most unique temples of China suitable for adventurous travelers. Narrow bridges and small corridors connect these houses to worship, but you can not visit for a long time. A large number of visitors reduces the effectiveness of the building safety. Hengshan was built in 491 which surprises a lot of architecture.

Temple of Heaven in Beijing 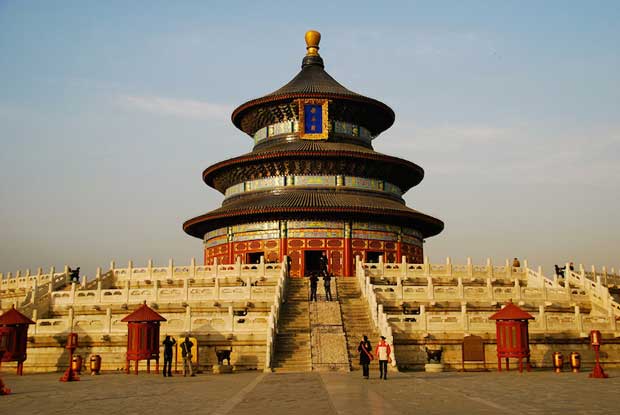 The most famous of the temples of China is the Temple of Heaven that is not technically a temple. This shrine is an altar. However, you will not find monks and worshipers here. The architecture of this alter in the heart of Beijing is stunning. The Equal Garden has four compass entrances. The garden inside is always in order in order to eliminate the imperfections of nature.

The halls here are heavily influenced by gardens. The buildings are round while their bases are square to reflect the old belief that heaven and earth are square. The highlight of this place is the worship hall park, a beautiful structure with a triple umbrella roof that is on a three-layer marble terrace.

Tourists are also coming to see the walls where you can look from side to side of this monument and be amazed. The whole structure of Confucius was made for an emperor known as the “Son of Heaven” who used the altar to pray for the sedition of his people.

When you are in Asia, you should take a look at other big country in the continent which is India. travelers love to see the most beautiful temples of India which offer great perspective into Indian culture and heritage as well as its many religious groups.

Tags:China Travel TipsTravel Guide ChinaWhat to Do in China