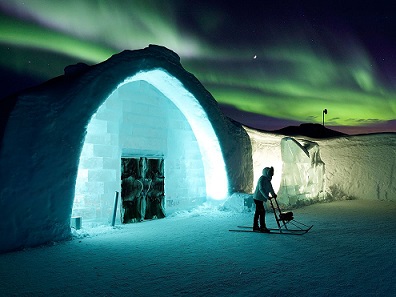 Information About Ice Hotel in Sweden

The ice hotel in Sweden is the first and largest hotel built entirely of ice and snow. It built in the year 1990 and in the village of Jukkasjarvi, 200 kilometers north of the Arctic Circle in Sweden. Also, the Ice Hotel is one of the most famous natural resorts in the world. The company that runs the hotel has been around since the 70s. It was the organizer of the tour in the area who had focused for many years on the summer season and the experiences in the midnight sun. In the dark winters the river froze and the locals stopped working in the small village of Jukkasjarvi.

Construction of Ice Hotel of Sweden

But at the end of 80s, they decided to make changes to this place. So instead of considering the cold and dark winter a problem, they took advantage of the unique elements of the Arctic that prevented activity, as a unique feature. Artist Janot Derrett, an ice specialist, was invited to the village in 1990 to open his exhibit at a special Eskimo hut on the frozen Torne River.

Named after the north hall, the 60-square-foot hotel is a tourist attraction for visitors. One night a group of foreign guests equipped with reindeer skin and a sleeping bag decided to stay in a cylindrical shack. The next morning, the group talked about the unique sense of sleeping in an Eskimo hut. Thus came the idea of ​​the Ice Hotel, and today the ice hotel in Sweden is renowned worldwide for its unique idea and extraordinary artwork.

The ice hotel in Sweden is reconstructed each year from year 1990 to the present day. This 60-square-foot hut turned into a 5000-square-foot hotel using 30,000 tons of snow and 4000 tons of ice. Using snow piles, snow is formed on a metal vault and then placed on ice columns to fortify the snow vault. In March, ice is harvested from the river Torne using tractors and saws, then these large pieces of ice are stored and used for winter hotel construction.

This hotel will not last more than 6 months because it will melt in summer. The exact number of rooms varies from year to year, but in winter of 2005 the hotel had 85 rooms. The hotel includes a reception area, lounges, columns, an exhibition of ice art, a cinema and a church. About 14,000 tourists spend the night at the hotel every year, and 40,000 tourists arrive at the hotel daily, covered in reindeer skin.

In April, the entire hotel is being melted down in the River Torne to prepare for renovations with new architecture and artwork in November and December next winter. Therefore, tourists experience a different ice hotel each year.

If you are also interested, you can visit other interesting hotels like this one and try the 7 most unusual Hotel around the world as well.

The inside temperature of the hotel, which can reach -40°C, depending on the ambient temperature, is between -9°C and -4°C. At night a special sleeping bag is given to the guests and a survival guide of “How to survive at the Ice Hotel” is discussed. Some people may want to try the restaurant’s dishes served on ice sheets from the Torne River as well.

During the day there are many activities such as snowmobile rides, snowboarding, Sled dog experience, reindeer sled safari and ice sculpture for guests. Visitors can attend concerts at an outdoor venue inspired by Shakespeare’s Globe Theater. The 520-person hall is a miracle in ice architecture, built by technicians in just three weeks. But the cost of staying at the ice hotel in Sweden is not low; the cost of staying in a luxurious room is 440 pounds per night.

Tags:Best Hotels in SwedenSweden Travel TipsTravel Guide SwedenWhat to Do in Sweden